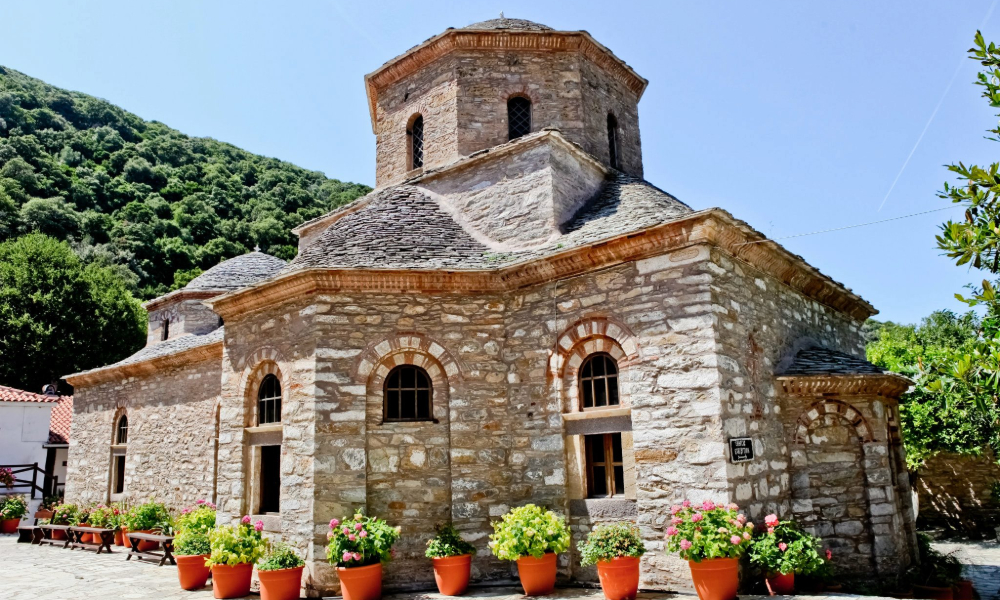 22 Aug THE SECRETS OF EVANGELISTRIA MONASTERY

The History Of The Monastery Immersed in the greenery, deep in the Lekhounio gorge beside the springs in the place called Agalianos, under Karaphlytzanakia, the highest peak on Skiathos, stands the Holy Communal Monastery dedicated to the Annunciation of the Virgin, The Evangelistrias Monastery or Vangelistrias as it is called by the Skiathians. Construction of the monastery was started in 1794 by a group of kollyvados monks who had been forced to leave the Holy Mount of Athos in the face of disturbances resulting from disputes over the celebration of Canonical Requiem Masses Saturdays rather than Sundays. The objective was a return to the tradition of the Ancient Orthodox Church. The group leader was Niphon, an Ordained Monk, whose worldly name was Nicholas “from the line of the Nicholarades”, who was born in 1736 at the village of Patrika on the island of Chios.Â He served in the Monastery of the Greatest Banner and the retreat of the Omnipotent on the Holy Mount of Athos. Initially he went to Samos, Patmos, Leipso and Icaria where, in 1775, he founded the monastery of the Annunciation at Leucada. Amongst the monks at the Monastery of the Annunciation was one Gregorios Khadjistamatis, a Skiathian, who, upon the death of his father, inherited extensive property on Skiathos. Possessing this large estate Gregorios persuaded Niphon to move to the green island of Skiathos and establish a new monastery, abandoning Icaria “for the all-pervading barrenness and unwholesomeness of the place”.

Construction of the monastery complex was completed in 1806 and it became the epicenter of the kollyvados both during the disputation and in the following years. The kollyvados spirit has profoundlyinfluenced the life of the Skiathian islanders and that most significant writer of (modern) Greek prose, Alexander Papadiamantis and also of the Skiathian author Alexander Moraitidis. Father Niphon, first abbot and founder of the monastery passed away at the age of 73 on the 28th of December 1809. The second abbot and cofounder were the Skiathian Gregorios Khadjistamatis (1809 – 1815). Subsequently, and to this day, there have been 30 other abbots the last of-whom is the present abbot, Father Angelos Lyssaris.

The Monastery of the Annunciation provided significant moral and material assistance to the pre-revolutionary movements as well as during the revolution of 1821. It was there, that in the year 1807, the first Greek flag with the white Cross at its center on a blue ground was designed, woven, blessed and raised. It was on this flag that Father Niphon swore in the guerrilla leaders Theodore Kolokotronis, Andreas Miaoulis, Papathymios Vlakhavas, Iannis Stathas, Nikotsaras, the Skiathian Teacher of the Nation, Epiphanios – Stephanos Dimitriadis and many others following the great assembly held at the monastery to lay out plans to liberate the (Greek) Nation. Evaggelistria5The philosopher priest, Theophilos Kairis, following his conviction by the Holy Synod in 1839, was confined to the Monastery. The plan view of the Monastery has a rectangular shape measuring 60 meters by 38. The principal Church of the Monastery is situated at the center of the complex, laid out in cruciform shape 20 by 8 meters in the three-niche Byzantine style with a nave and transept. It is covered by three domes sheathed with grey shale stone.

The floor is covered with Maltese slabs and tiles in various arrangements. The carved wooden iconostasis and the fine portable icons dating from the 17th and 18th Centuries are impressive. The uplift of the domes, iconostasis and the whole church in general evoke awe and reverence, impressing and enchanting the pilgrim.Â The nave was decorated by hagiographers in 1822 and is the only nave decorated by hagiographers from Galatista in Khalkidiki. The remainder of the Church is without plaster. The materials and the uniquely astounding manner in which the church has been constructed and the other buildings of the monastery show that it was the work of experienced, highly skilled craftsmen with high spirits and a yearning for perfection, according to plan and the rules of the art with nothing ad hoc. There still exist in the monastery the cells, dining hall, infirmary, guest house, kitchen, bakery, olive press, library and the chapels of St. John and St. Demetrios, the store rooms, stables, cisterns and tanks, et al. A great impression is made by the high kitchen chimney stack, the imposing pylon with the entrance, the passageway and the dining hall which demonstrate the magnificence of the edifice.Â

The joy of all aggrieved and patron of all wronged, food of the poor and strangers’ petition, cane for the blind, visit to the ills, shelter for the harassed and apprehension and aid to the orphans, mother of God the Sublime, you exist Immaculate, hasten and enlighten thy slaves. A large number of Holy Relics are in the custody of the monastery of the Annunciation, a truly Holy Treasure which evokes a shiver of emotion and admiration. In the principal church of the monastery the Holy remains of Saints Haralambos, Pantelemon, Paraskevi, Dionysos the Areopagite, John Chrysostomos, Athanasios the Great, Euthymios, Theodore the Warrior, Polykarpos of Smyrna, Tryphon, Constantine of Hydra, Niphon of Constantinople. Theoktisti, Polydoros, Kosmas the Anargyros, Matrona of Chiopolis, Georgios of Ephessos, Demetrios of the Peloponese. Theodore of Byzantium, Jacob the Persian, John the Hermit, and the (co-)martyr Holy Fathers and many other Saints.

Many of these were presented to the Monastery by Admiral Lazarus Koundouriotis in recognition of the great contribution made by the Monastery in the liberation of the Nation. In the library there are lead patriarchs’ seals, signets and letters, manuscripts of the last five Centuries, printed books from the 17th, 18th and 19th Centuries, letters by Saint Nicodemos of the Mount Athos, of Constantine Oikonomos, Theophilos Kairis and many others.

Such relics as have been saved are kept in the vestry: silver chalices, trays, bread baskets, tongs, silver and wooden blessing crosses, cherubims and a handwritten and handbound Gospel of exceptional artistry with gold, silver and precious stones dating from 1785. Two other Testaments bound in 1785, Incense and myrrh holders from 1755, epitaph (arks), chalices, candle holders, et al.

In the vestry of the Principal Church there are a large number of portable icons from the 9th, 12th and from the 16th to the 19th Centuries including the “un-withering rose” , St John the Baptist, the ascension of the Mother of God, the Omnipotent, St. George, St Theoktisti, St. George of Ioannina, The Three Hierarchs, St. Atrhanasios of Athos and many more. Finally, in the old Monastery olive press, where a folklore museum has been installed recently, many domestic implements are on show, with farming and building tools such as plows, weighing scales, hand-grinders, scythes, looms and much else which is being lost today. Following the passing away of Father Gerasimos Zouras, who served for 39 years the monastery remained without an Abbot for two years and was in danger of remaining deserted. Now, with the installation of the new Abbot Father Angelos Lyssaris following a decision by the Reverend Metropolitan of Khalkis, Istiaia and the Northern Sporades, Chrisostomos, a new period of creation and progress began for the monastery.

From the very first day, maintenance and reconstruction commenced. As always the Skiathians embraced the monastery with respect and real affection. For every Litany, the church is crammed full, especially by young people, with the climax Ressurection is celebrated with the Holy Flame from Jerusalem, which arrives a few hours earlier by a special aeroplane chartered by the ship owner Andreas Potamianos. Thousands of pilgrims flock in for the 15th of August. On the eve of the Holy Feast the Epitaph of the Virgin is brought out in an atmosphere of unique devotion with the melodic praise of the Mother of God sung by the Skiathians all together. This is a custom to be found in very few places in Greece.Â

Within a few months repairs and/or reconstruction was carried out on the residency, the new dining hall, a new kitchen, an exhibition, a folklore museum, the library, the vestry, the Chapels of Saints John and Demetrios, the Abbot’s quarters, the sewers and the cisterns, the calendar and electric lighting. A vineyard was laid out, a garden and numerous fruit-bearing trees, ornamental plants and lowers have been planted. Reconstruction of the old two-storey dining hall will commence shortly, together with that of the kitchen, bakery, cells, guest house, stables and the laying of slabs in the western courtyard, etc. In parallel with all this, rich spiritual, apostolic, social and charity work together with the heart-felt hospitality generously accorded to every pilgrim, has made the Monastery of the Annunciation a sheltered harbour of spiritual clam, an oasis of tranquillity, spiritual freshness and uplift in today’s turbulent and anxious world, and especially for our youth, a spiritual beacon with the bright light of Greece and Orthodoxy which will soon be a Pan-Hellenic pilgrimage.

Among the Monastery’s new projects, as already mentioned, is the creation of a model vineyard for production of the famous Alypiakos wine which was produced many years ago. Already in 1998 Alypiakos wine was produced on an experimental basis at the Monastery and bottled after a lapse of 150 years.
The name is owed to Father Alypos, fourth Abbot of the Monastery after Niphon, Gregorios Khadjistamatis and Flavianos. Alypiakos wine as claimed by the greatest of Greek short story writers, Alexander Papadiamantis, in his tale “The Black Ignoramuses” was “suitable to relieve the sadness and worries of this world.”  This year a quantity adequate for the needs of the Monastery and the multitude of pilgrims and friends will be produced. The program for new activities at the Monastery anticipates the preparation of traditional confections, honey, tsipouro , bottling of olive oil production, etc.